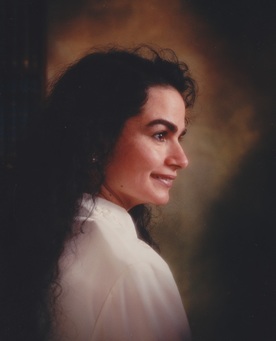 ​Holds MA in translation & Linguistics from University of Westminster as well as MSc in International Finance from Westminster Business School.  Her first academic thesis was a translation of Chomsky's "World Orders:Old and New" of which Chomsky himself praised her enlightening political and linguistics analysis in his formal letter to her. Granted distinction on her thesis: “Forecasting Volatility of Oil Prices and their Effects on the Economy." The project was chosen to be in the library of Westminster Business School as future reference.

Through her poems, proses and short stories addresses political issues within social and personal matters.
Although she reads her English and Arabic poems at different venues even on TV Intreviews (i.e. Alhiwar); her Arabic writings appears in prominent magazines and journals such as “Sayyidaty,” Asharq Alawsat” and “Alquds” since the 90s. This is besides other online literature magazines such as the English poetry magazine: "Ink, Sweat & Tears" . The translation of David Hare's "Via Dolorosa" appeared in the literary Periodical of "Oud Annad" amongst others.

The contribution of economics and financial analysis appears at "Al-Hayat" newspaper.

May's poetry books "Warm Whispers;” published by the Arab Institute of Publishing and Distributing, Amman-Jordan in 2000 was successfully sold in the Arab World. "and.. She Whispered;” published by Akad, Cairo-London in 2014.
May also writes about art and its techniques. Always attends prominent classes in Arts updating and experimenting new techniques. Haiku & Haiga are hidden in her paintings and calligraphy –preferable media: watercolour besides silk-painting. Her work also displays in high standard exhibitions.